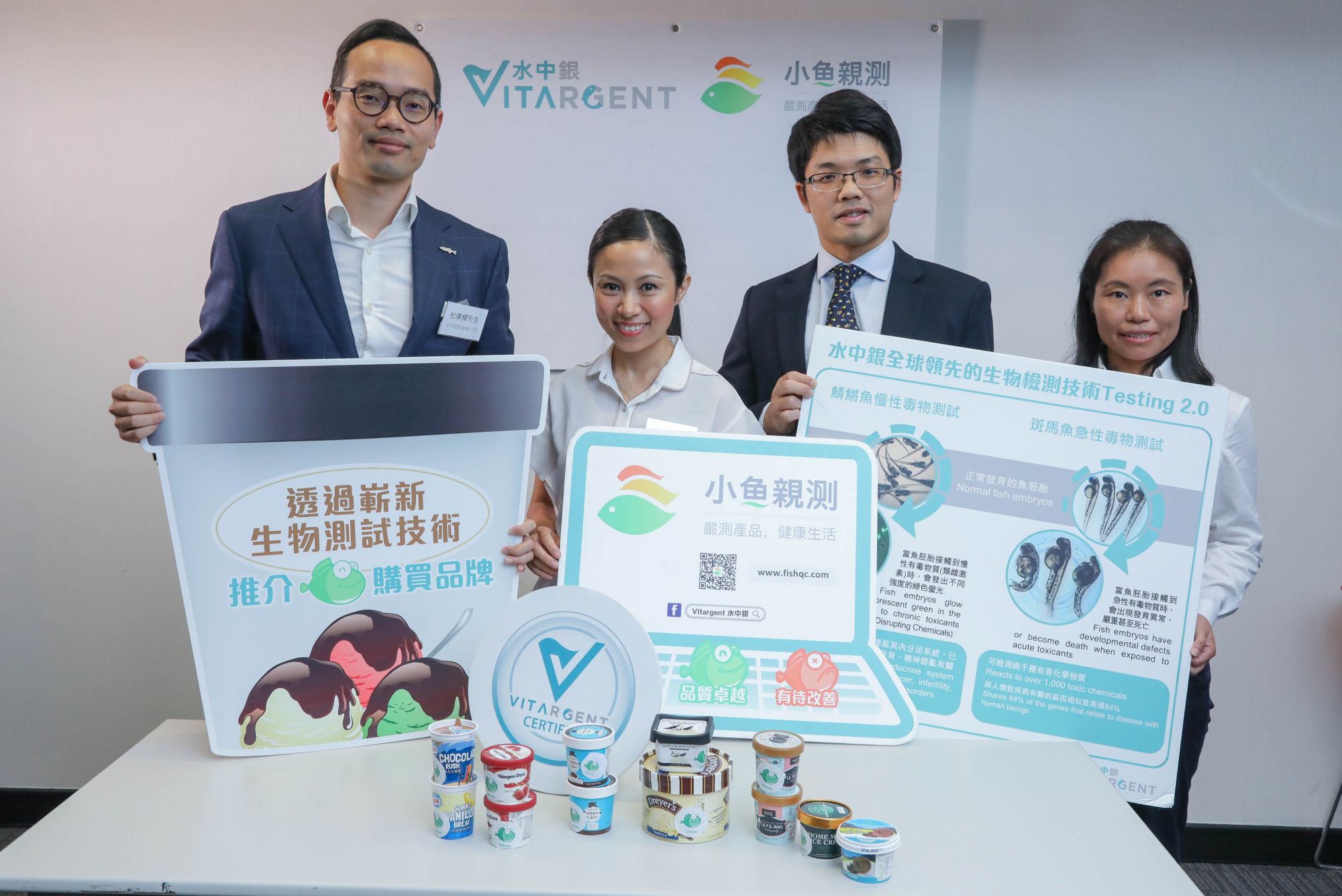 (Hong Kong, 21 September 2017) Vitargent (International) Biotechnology Limited (“Vitargent”) published test results of 29 popular ice-cream products under 9 brands available in the market on its Test-it™ information platform (www.fishqc.com). Known for its safety examination of cooking oil, BB cream, instant coffee and sunscreen, Vitargent has applied the “transgenic medaka” and “zebrafish” embryo toxicity testing technology, which is unique in the world and developed by Hong Kong scientists. The safety test rated 12 samples as Green Fish (excellent), 7 samples as Yellow Fish (basic) and 10 samples as Red Fish (sub-optimal). Although the food additives in the samples as shown on the product labels followed the recommended usage of various countries, in Vitargent’s test using the global leading bio-testing technology Testing 2.0, the fish embryos exhibited abnormal development or died in some cases when exposed to certain ice-cream samples. This indicated that such samples contained toxic substances which traditional testing technology failed to detect. Hence, consumers are recommended to choose brands that are safe to buy and those that have passed the “Green Fish” triple test.

Ice-cream is a popular and refreshing treat in hot summer. Recently, a story about an ice-cream that did not melt under the sun for five straight days made international news and got people surprised and worried about the negative impact of additives in ice-cream on their health. Meanwhile, consumer awareness was raised as the Centre for Food Safety found that a few local ice-cream parlours were selling products with an excessive total bacterial count. In view of such, Vitargent purchased 29 ice-cream products from major supermarkets (Yata, PARKnSHOP and City’Super) and 7-11 convenient stores in Hong Kong for fish embryos toxicity tests in May 2017. Samples tested include products from 9 world-renowned brands such as Nestle, Haagen-Dazs, Dryers, MOVENPICK and LILY & RAN.

Vitargent performed tests on ice-cream samples by adopting the Testing 2.0 technology, which is a patented fish embryo bio-testing technology. Under which, samples are categorised as Green Fish, Yellow Fish and Red Fish according to product safety. The test result was published on the online consumer product safety information platform, Test-it™, for consumers to recognise safe products sold by retailers. Test-it™ benchmarks against the national and regional product safety standards, including those imposed by the World Health Organization (WHO)1、, the European Union (EU)2、3、4, the USA5, China6 and Japan7, as well as the list of Substances of Very High Concern (SVHC)  8prepared by the European Chemicals Agency (ECHA). Horizontal analysis against similar products was also conducted to establish safety standards:

More expensive ice-cream may not be safer; Swiss brands performed better than other countries and cities

All in all, most low and mid-priced ice-cream products had unsatisfactory safety performance, with less than half of them rated Green Fish. Despite such, given that a high percentage of expensive ice-cream products was also rated Red Fish, the price may not be the most important consideration when purchasing ice-cream.

For the place of manufacture, over 60% of the samples were from Hong Kong, and the rest were from France, Switzerland and New Zealand.

In other words, ice-cream manufactured in Switzerland had the best safety performance than those made in other countries and cities, while products manufactured in Hong Kong are not particularly safe.

Vitargent’s Chief Executive Officer Jimmy Tao said, “In general, all food products must pass the most basic inspection under current Hong Kong food regulations before launching to the market. For instance, according to the Frozen Confections Regulation9, ice treats other than soft ice-cream must not exceed the bacteria or coliform bacteria limit and must be kept below -2 °C. Nonetheless, traditional test methods can only cover the most common 5 to 10 toxicants, and other harmful substances may be missed in the screening. Our bio-testing technology has revolutionised the world as a new testing method that helps to improve overall product safety. Based on biological responses, our test can identify the “cocktail effect” caused by mixing over 1,000 toxicants and chemicals within 48 hours, while covering chemicals that are not included in routine tests.”

Vitargent applied zebrafish embryos and transgenic medaka embryos for the testing of acute and chronic toxicants in ice-cream samples. As zebrafish embryos have analogues of 84% of genes associated with human diseases, substances that are toxic to them are likely to be toxic to human. For the testing of acute toxicity with zebrafish embryos, 12 samples (41%) were rated Green Fish, seven samples (24%) were rated Yellow Fish and 10 samples (35%) were rated Red Fish. Jimmy Tao said, “When we exposed zebrafish embryos to the acute toxicants in the ice-cream samples, we noticed that they showed abnormal development, such as tumours in heads or tails and swelling heart under the microscope. In severe cases, some embryos died.” On the other hand, in the testing of chronic toxicants with transgenic medaka embryos, 23 samples (79%) were rated Green Fish and six (21%) were rated Red Fish. Jimmy Tao said, “Transgenic medaka embryos are mainly used in the test of chronic toxic chemicals (estrogenic endocrine disruptors). In our test, except for the six samples that were marked Red Fish after the fish embryos were killed by their high toxicity, all the remaining 23 samples passed the test and we did not see green fluorescent light emitting from fish embryos (fluorescence indicates the presence of estrogenic endocrine disruptors).”

Regarding the ingredients of ice-cream, Jimmy Tao pointed out that the most common additives found in all tested samples were guaran (also known as guar gum, found in 22 samples), locust bean gum (also known as carbo bean gum, found in 15 samples) and carrageenan (found in 15 samples), which were commonly used food emulsifiers, thickeners and stabilizers. When used in appropriate amounts in accordance with WHO regulations and national requirements of various countries, they would not cause health risks.

Nutritionist Annie Lee said, “Common additives in ice-cream, such as guaran (E412) and locust bean gum (E410), are natural gums that are mainly used in emulsification, thickening and stabilisation. Carrageenan (E407 / E407a) is extracted from various red algae and commonly used in ice-cream and dairy products as gels, thickeners and emulsifiers to improve texture. The WHO10, the European Food Safety Authority (EFSA)11 and the China Food and Drug Administration12 have imposed a limit on the use of carrageenan in baby food. The EFSA even banned its use in food for infants under 4 months. Furthermore, xanthan gum (E415), which is a polysaccharide produced from the fermentation process by bacteria, is often added as an emulsifier, thickener or stabilizer to food. However, as shown in the 2017 re-evaluation report of the ESFA13, xanthan gum may contain heavy metals such as lead, arsenic, cadmium and mercury. Thus, the ESFA plans to revise the limit of heavy metals in xanthan gum so that it will not become the major source of food poisoning. Food colorings and preservatives are also widely found in ice-cream, though they are not necessary for food production. Both natural and artificial food colorings are used to replace the raw materials and add colors to ice-cream to enhance appearance. However, previous studies14、15 suggested that excessive intake of colorings can cause hyperactivity and mood swing in children.”

According to Annie Lee, while it is important for parents to pay attention to the safety of ice-cream products for their kids, the elderly and pregnant women should never overlook the risks. The manufacture, transportation and freezing of ice-cream may increase the bacteria count of E. coli and Listeria. As pregnant women are especially prone to Listeria infection, it is recommended for pregnant women, kids and the elderly to avoid eating soft ice-cream and to choose high-quality and well-stored hard ice-cream. In addition, people who are allergic to milk solids and milk can select ice-cream made of yogurt to prevent causing stomach irritation and diarrhoea, as yogurt contains probiotics that play an important part in gastrointestinal health.

Jimmy Tao reminded that the current safety analysis on food additives primarily focused on analysing the risks of a single ingredient and did not take into consideration the combined toxicity effects when such ingredient was mixed with others. Besides, the selection of ingredients, manufacture, transportation and storage of ice-cream might compromise food safety. Consumers can visit the website of the Test-it™ online consumer product safety information platform (www.fishqc.com) for information of “Green Fish” products that passed the screening of acute toxicity, chronic toxicity and banned ingredients, so as to enjoy safer shopping.

[5] USFDA FOOD ADDITIVE STATUS LIST, COLOR ADDITIVES IN FOOD, AND EVERYTHING ADDED TO FOOD IN THE UNITED STATES (EAFUS).

[7] STANDARDS FOR USE, ACCORDING TO USE CATEGORIES.  EFFECTIVE FROM SEPTEMBER 26, 2016.

[13] WHO & UNEP. STATE OF THE SCIENCE OF ENDOCRINE DISRUPTING CHEMICALS-2012.  AVAILABLE AT HTTP://WWW.WHO.INT/CEH/PUBLICATIONS/ENDOCRINE/EN/