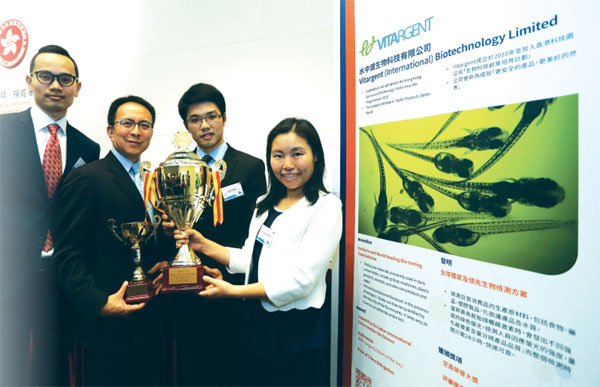 Hidden toxins in food and other everyday consumer products may come to light before causing health hazards, thanks to a solution developed by a Hong Kong bioscience company, Vitargent.

The World Health Organization reports that contaminated food is associated with deaths of an estimated 2 million people annually around the world.

Hormones are mixed into the feed of cattle, hogs and poultry as a matter of routine, to accelerate growth. The growth hormones in animal feed are passed down the food chain, and are known to increase the incidence of reproductive disorders in humans, the WHO found in 2012.

“Both fish and human beings are sensitive to many similar toxins. The difference is that fish have a shorter response time,” says Eric Chen, founder and director of Vitargent.

In humans, it takes 10 to 20 years for serious effects of toxic materials consumed in foods to emerge — manifesting as cancer, cardiovascular diseases and degenerative conditions.

We cannot afford to wait 20 years to see if certain chemicals can cause cancer. By then it could be too late, the American Cancer Society has concluded.

The impact of harmful chemicals on fish embryos, however, is immediate. When the living environment is askew, the development of fish embryos goes awry, so that they develop physical defects, stop growing, and some die.

The genetically-engineered embryos have proven capable of identifying the presence of any of the 1,000 toxins at a time, compared with fewer than 10 by traditional methods.

“When we test cooking oil, we normally target aflatoxins (highly toxic compounds linked to liver cancer), heavy metals, benzopyrene (a carcinogen tied to lung cancer) and detergent. But we probably don’t expect plasticizer (used as an additive used occasionally to increase liquidity of materials) in the oil sample,” says Chen Xueping, chief technology officer of the company. “When we find the amounts of aflatoxins, heavy metals and benzopyrene are lower in sum than the total level of toxicity, we know there must be some other toxins needing to be identified. Then we turn to chemical analysis to track down the existence of plasticizer.”

The invention of the modified embryos earned the Grand Prix at the 43rd International Exhibition of Inventions of Geneva in April.

The team developed two types of fish embryos, each to serve a different purpose. One breed, called Medaka, detects estrogen-like substances in cosmetics, pesticides, dairy products, meat, seafood and nutritional supplements. Estrogen extracts are added to skin cream and hair care products — products advertised as enhancements to skin elasticity and hair thickness. But long-term exposure to estrogen has led to early puberty in girls, and upset fertility cycles in mature women, preventing them from getting pregnant.

Unwitting consumption of excess estrogen hidden in food and water has led countless people to suffer from infertility every year, said Chen.

The Medaka fish embryos in the Vitargent testing undergo genetic engineering in preparation for use. Researchers extract the DNA of green fluorescent protein from jellyfish, modify the DNA to make it more stable and inject it into Medaka genome.

Chen Xueping explains hormones can prompt the release of proteins in embryos, called a gene expression. As the protein in the embryos becomes observable, the Medaka embryos, when exposed to estrogen-related compounds, turn fluorescent green under the microscope.

Before the test, researchers must pre-treat solid samples, to inoculate Medaka embryos with liquefied samples in three different concentrations.

Chen Xueping explains varying the concentration of suspected contaminated samples helps minimize errors. “We put in eight embryos, not one or two, to minimize eccentric reactions based on individual differences. Some embryos may be sensitive to certain substances, while some may not. So ‘eight’ is a safe bet.”

Prior to testing, the Medaka embryos are stored in an incubator for 24 hours. The intensity of the green coloration is directly proportional to the degree of toxicity.

The second modified embryo is taken from the Zebra fish — which exhibits developmental defects when exposed to toxic materials. Zebra fish, says Chen Xueping, closely approximate the metabolic activity of human beings, developing an edema — a fluid build-up causing a tumor-like swelling – in contact with toxins.

Also tails of the Zebra fish tend to curl when exposed to toxins in water. 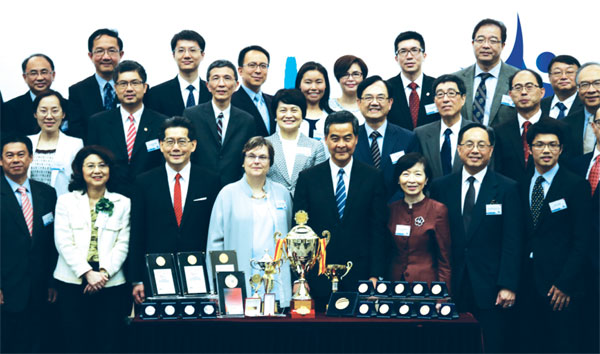 Chief Executive Leung Chun-ying has hailed the new innovation as the result of successful cooperation between “the government, industry, academia and the research sector”.(Parker Zheng / China Daily)

Vitargent was commissioned by the government to examine samples from some major international brands and popular local ones. The results were astonishing. Apart from malformation, male zebra fish embryos displayed female physical characters, and vice versa.

In August 1998, US EPA released a report listing 87,000 chemical substances in consumer products. “The number must have spiked since then,” Chen Xueping warns. “Thousands of new chemical compounds can be found annually. Synthetic chemicals in considerable quantity make things even worse.”

Vitargent has adopted a “snowball effect” approach, says Eric Chen. “We approach business giants first to convince them and train them to use the technology. As their safety levels are raised, causing consumers to shift their preferences to those brands, now guaranteed safe, other business rivals will be forced to follow suit naturally.”

Although the new method costs 20 percent more than traditional testing (chemical analysis), it is affordable by most businesses, says Eric Chen.

He told China Daily more than 10 large companies have purchased the technology, without giving away the names. The next step is to hook up with e-commerce enterprises such as Alibaba, which have gained huge popularity on the mainland as a reliable online purchase portal.

Nevertheless, Eric Chen does not think it is appropriate to introduce the technology as a household product. “I envision people would flinch when they use fish embryos to test their foods at home, only to find many contain chemicals or estrogen-like compounds.” He said the company will wait for the overall food safety standard to be raised and update the technology into portable chips or indicator paper for household use.

Not the ultimate solution

Some scholars, however, are skeptical of the effectiveness of the new technology.

Chiu Siu-wai, professor of the School of Life Sciences at the Chinese University of Hong Kong, says, “I agree that it is very speedy compared with traditional methods, but it can only connote the existence of disruptive substances and can’t tell us their exact names. We still have to resort to chemical analysis to work this out. The new method can complement the old-fashioned chemical analysis but can never replace them.”

Even though fish are comparable in some ways to humans in their reactions to life-threatening substances, the two are not identical, Chiu said. “Fish might be immune to some toxins that are otherwise averse to us,” she added. “On top of that, if we test solid things, we would slice just a small chunk off and turn it into solution for experiment. But the amount of sample may be too little to cause reaction in fish embryos.”

Chiu suggests the test be practiced on both fish embryos and animal cells such as that of rats. “If separate tests yield the same result, we could say the sample might be dangerous to humans with more confidence.”

When it comes to examining cosmetic products, Chiu contends that the fish embryo method is not state-of-the-art. “Developed countries have gone ahead of us,” she says, “Human skin cell cultures have been widely exercised in France and Japan where cosmetic products enjoy a large market. Undoubtedly, leaving human skin cells in contact with cosmetic samples is the most straightforward alternative.”

Chiu expects the government to invest more in scientific research on food testing and analysis, even though she is positive about Hong Kong’s existing food safety surveillance.

Despite so many doubts, Vitargent has earned recognition nationally and internationally. Chief Executive Leung Chun-ying publicly applauded Vitargent’s accomplishment, saying on his personal website “by commercializing the scientific research findings of a local university and winning this major international award, the founders of Vitargent have demonstrated that great results can be achieved through cooperation among the government, industry, academia and research sectors”. Leung said the award winning technology is a proof of the local professionals’ ability to rank among the best in the world.

The innovation also drew attention from the mainland. Zhang Laiwu, vice-minister of science and technology of China, expressed interest in the technology, saying “it’s economic, fast and comprehensive”. The Administration of Quality Supervision, Inspection and Quarantine from the central government is planning to collaborate with Vitargent.