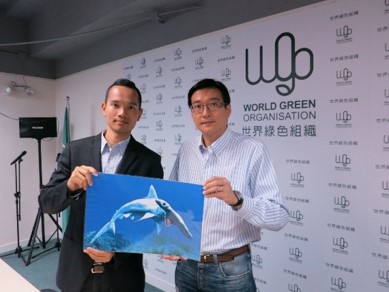 Effective on 14th September 2014, five more endangered shark species will formally be included in the Appendix II of the Convention on International Trade in Endangered Species (CITES), which means that the trade of those shark species will be further restricted. World Green Organisation (WGO) is committed to protecting these endangered shark species, and urges the public to stop consuming shark fins. In order to investigate whether shark fins for sale and trade in Hong Kong markets come from endangered shark populations, WGO worked with an independent laboratory, Vitargent (International) Biotechnology Ltd., and discovered that individual dried seafood stores are still selling shark fins belonging to the species to be included in the Appendices of CITES. Thus, WGO and Vitargent request that the local shark fins industry, including the importers and suppliers, provide proof in the future to show that shark fins for sale and trade are not from endangered categories.

Currently, three endangered shark species have been included in Appendix II of CITES. However, the appearance of shark fins processed from the five newly added endangered shark species are of little difference compared to the non-restricted shark species and they are hard to distinguish. In order to tackle this problem, this July, WGO commissioned Vitargent to buy nine dried shark fin samples based on random sampling from different dried seafood stores located in Sheung Wan, with the aim of adopting a DNA test to identify whether those shark fins are from endangered species or not.

That testing result was rather alarming. According to Vitargent’s DNA test on three shark fin samples, one of the samples belonged to the future restricted species, the smooth hammerhead shark (Sphyrna zygaena). This species, together with another four species, will be included in Appendix II of CITES on 14th September 2014. (For details of the five species, please refer to Remark 1.) In Hong Kong, this ordinance will come into effect on 28th November 2014, by the time the Endangered Species of Animals and Plants (the ordinance), Cap. 586 will be enforced. Thus, personnel who engage in the related trade are closely monitored; they need to be under the scrutiny of the permit/ license system. In other words, selling or participating in shark fins trading without a permit/license is illegal and in violation of Appendix II of CITES. Convicted offenders are liable to a maximum fine of $500,000 and to imprisonment for one year[1].

Jimmy Tao pointed out that the identification of the endangered shark species can be done by their established DNA technology. Vitargent’s research team had started research on this since 2012. Based on international published journals and their sophisticated laboratory test and the data generated, his professional research team validated two markers for specific shark species, which is proved to be reliable in identifying the eight endangered shark species under Appendix II of CITES. Vitargent’s laboratory will adopt their unique DNA extraction methods to extract sharks’ DNA from the samples. A Polymerase Chain Reaction technology will then be used to multiply the DNA markers so as to identify the specific shark species. At this stage, the laboratory is able to validate ten specific shark species and eight of them are under the category of Appendix II of CITES.

Dr. William Yu, CEO of WGO, reiterated the importance of shark protection. He suggested these issues can be addressed in two folds. The consumption of shark fins can be stopped via the demand side management through public education. For supply side management, on the one hand, the Hong Kong government should conduct regular inspection on shark fins trade and sale in order to protect the endangered species. On the other hand, the shark fins industry, which includes the importers and suppliers, should be self-regulated by providing proof when trading or selling the shark fins. Dr. Yu further said that WGO would join hands with Vitargent to contact the Secretariat of CITES and propose a strategy for the protection of endangered shark species.

Endangered shark species to be included on 14th September 2014, in Appendix II of CITES

[1]CITES has been implemented in Hong Kong. Convicted offenders of Appendix I of CITES are liable to a maximum fine of $5,000,000 and to imprisonment for one year.