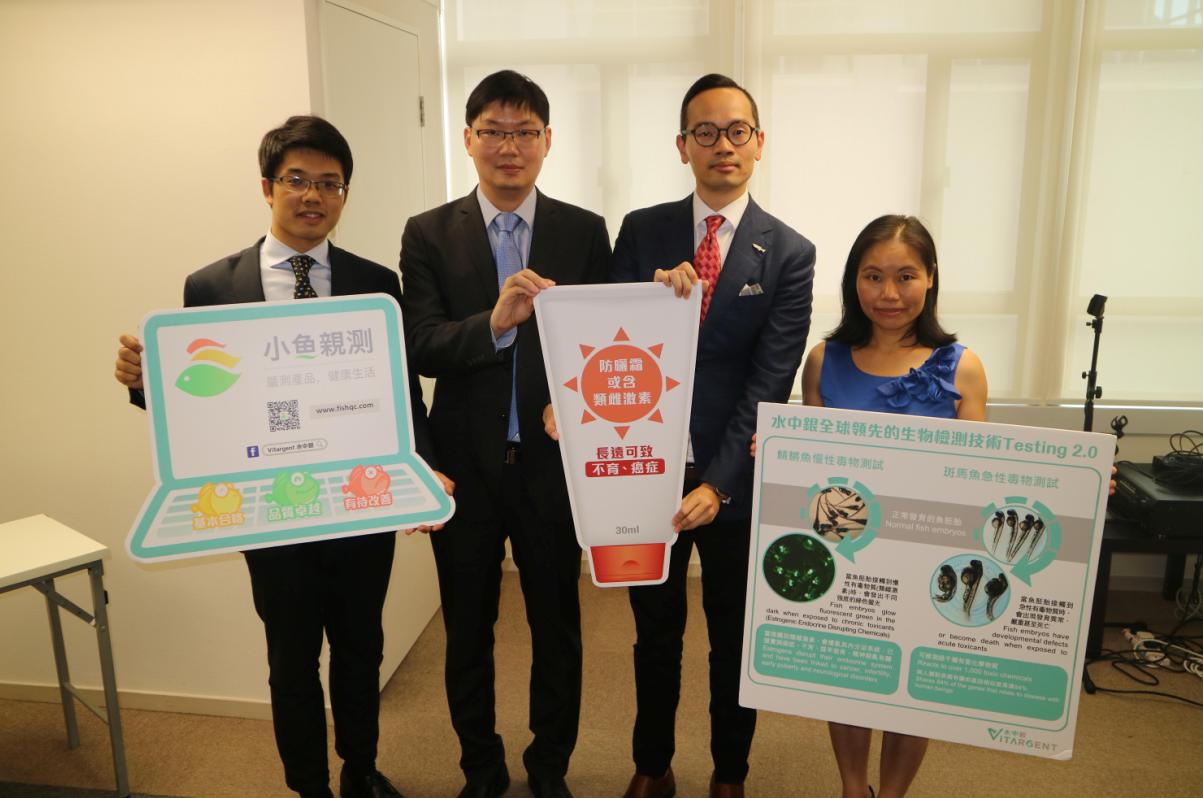 (Hong Kong, 17 August 2017) Vitargent (International) Biotechnology Limited (“Vitargent”) published the test results of 51 popular sunscreen products on the Test-it™ platform (www.fishqc.com). Known for its safety examination of cooking oil, BB cream and instant coffee, Vitargent investigated sun cream samples with the world-exclusive “transgenic medaka” and “zebrafish” embryo toxicity testing technology that was developed by Hong Kong scientists. The safety test rated 16 samples as Green Fish (excellent), eight samples as Yellow Fish (basic) and 27 samples as Red Fish (sub-optimal), while identified over 20 types of estrogenic endocrine disruptors (EEDs) in the sunscreen samples. The study discovered that the level of EEDs in 18 samples exceeds Vitargent’s safety standards. Meanwhile, four samples with particularly high EED concentration were found to contain as much EEDs per gram as contraceptive pills. The test also concluded that sunscreen products with active physical ingredients are safer than those with active chemical and hybrid ingredients. In view of this, Vitargent advised consumers to pay attention when making decisions.

To block UV radiation on a scorching summer day, people put on sunscreen no matter they are indoor or outdoor. With overwhelming choices of sun cream products in the market, consumers not only consider their brand preference, skin type and complexion, but also pay attention to the products’ SPF and their ability to meet different needs, such as whitening, protection against skin darkening, moisturising, repairing, concealing and waterproof qualities. As a result, they may overlook the extra features and chemicals contained in the products. Vitargent purchased 51 sun cream products from beauty halls, Watson’s and online shopping platforms such as Kaola.com, Jingdong and Tmall and put them to the fish embryo toxicity test. Its samples came from 37 world-famous brands like Biotherm, Innisfree, Sunplay and Anessa.

Vitargent’s Chief Executive Officer Jimmy Tao said, “The UV index in Hong Kong is generally “high” and even “very high” on some days, but what people don’t know is that UV radiation can do harm even on cloudy days, in autumns and winters or in indoor. UV radiation can damage skin over time, so even if you don’t appear to have sunburn, long term exposure from outdoor and indoor activities can also be bad for you. That’s why it’s necessary to put on sun screen. Many people are so busy that they prefer all-in-one sun cream products to save time. Since sunscreen should be applied extensively on the skin, consumers should be aware of the safety and potential risks when making purchases, as studies have shown that chemicals in sunscreen products can penetrate the skin.”

In the past few months, Vitargent performed tests on sunscreen samples by adopting the Testing 2.0 technology, which is a patented fish embryo bio-testing technology. Under which, samples are categorised as Green Fish, Yellow Fish and Red Fish according to product safety. The test result is also published on the online consumer product safety information platform, Test-it™, for consumers to identify safe products sold by retailers. Unlike traditional chemical testing methods, Vitargent’s biological testing technology enables the screening of “cocktail effect” caused by mixing over 1,000 toxicants and chemicals within 48 hours. The technology covers chemicals that are not included in the routine test. The zebrafish embryos used in acute toxicity testing of sunscreen have analogues of 84% of genes associated with human diseases[1], hence substances that are toxic to zebrafish embryos are likely to be toxic to human. For the testing of chronic toxicants (EEDs) in sunscreen, as the livers of medaka embryos used in the test emit green fluorescent light in the presence of harmful substances, the intensity of the fluorescence can be used to quantify the toxic chemicals.

Test-it™ benchmarks against the national and regional safety standards for cosmetic products, which include standards in the European Union, the United States of America, China and Japan. Horizontal analysis against similar products is also conducted to establish safety standards:

Test-it™ rated 16 out of 51 sunscreen samples as Green Fish (Excellent), eight as Yellow Fish (Basic) and 27 as Red Fish (Sub-Optimal).

The average price of the 51 samples purchased is 5HKD/ml. The most expensive sample costs 20.6HKD/ml, which is 52 times of the cheapest one which costs 0.4HKD/ml.

All in all, most of the low-priced and high-priced sunscreens were not safe, with over half of the samples rated Red Fish. Therefore, consumers are advised to choose carefully. On the contrary, mid-priced samples had the best safety performance.

Sunscreen products with SPF 30 or above are less safe; physical sunblock performed better than chemical and hybrid sun cream

There are three main types of sun protection: through physical means, chemical means and a combination of both. Physical sunscreens work by forming a thin protective layer on the skin that blocks or reflects UV radiation, whereas chemical sunscreens absorb UV radiation with chemicals to neutralise and mitigate the direct damage to the skin, thereby achieving the desired effects. “Most of the sun cream products available in the market contain chemical ingredients that are colourless and odourless. As they leave no white cast on skin, the skin tone looks more natural. Nonetheless, our tests found that physical sun cream products are safer than chemical and hybrid ones, with four samples of physical sunscreen rated Green Fish (80%) and one rated Yellow Fish (20%), as compared to chemical sun cream of which two samples were rated Green Fish (11%) and 17 were rated Red Fish (89%), as well as hybrid sunscreen of which five samples were rated Green Fish (28%), four were rated Yellow Fish (22%) and nine were rated Red Fish (50%). Titanium dioxide and zinc oxide in physical sunblock are inorganic chemicals that are mild in nature and unlikely to cause irritation, hence suitable for sensitive skins and kids with delicate skins,” said Jimmy Tao.

Jimmy Tao also pointed out, “The EED level in 18 out of 51 samples exceeded Vitargent’s safety standards. In particular, four samples were found to contain 12,000-17,000 ng of EEDs per gram, which is even higher than a contraceptive pill (containing 10,000 ng of EEDs). We also identified over 20 types of EEDs in our samples, including the extensively used octocrylene found in 21 samples, octinoxate in 20 samples and Parsol 1789 (avobenzone) in 18 samples. According to the WHO and United Nations, EEDs may cause cancer, reduce reproductive success, lead to immune disorder, precocious puberty and diabetes[3], among other health effects.”

Family physician Dr. Chow Chong Kwan said, “the chemicals in sunscreen products can be readily absorbed through skins and transported to different body parts via the bloodstream. Scientific studies have proved that chemicals in sun cream can enter breast milk[4], breast tissue[5], placenta[6] and even in the baby[7]. EEDs such as the commonly found chemical sunscreen and widely used paraben preservatives can disrupt our endocrine system, upset metabolism and affect fertility.[8]”

Dr. Chow reminded parents that some sunscreen for adults contains fragrances and preservatives that may lead to skin allergy and eczema. Therefore, parents should avoid putting such products on their kids, as they have delicate skin. Instead, they should select products with simple formulas that are specially designed for children. Besides, infants aged under six months shouldn’t use sun cream and should avoid direct sunlight. Dr. Chow also recommended applying sunscreen 30 minutes before going outdoor. Because Hong Kong is so humid, sun cream products can be washed away easily by sweat. Thus, people who are sweaty or participating in water sports should re-apply more frequently. However, they should not use sun cream excessively as this will clog pores. Sunscreen, no matter the SPF value, can only stay effective for two hours, so users should reapply to uncovered body parts every now and then. It is also recommended to drink more water after prolonged sun exposure to rehydrate, and use lotion to moisturise skin.

[2] The burning Facts. available at https://drive.google.com/drive/u/1/folders/0B1_f96X6Yt9ARnJRZjBkZGs5SE0.

[3] WHO & UNEP. State of the science of endocrine disrupting chemicals-2012.  Available at http://www.who.int/ceh/publications/endocrine/en/